SPRING IS IN THE AIR! Well it is here, now the weather just needs to catch up.

Some of you may have noticed my lack of recent Fashion Friday posts, I have come to the conclusion that Friday's are quite difficult to post regularly (especially since it is the end of a long work week). So now I have decided to do STYLE SUNDAYS, and Spring Fashion Recap will be the kick off. This STYLE SUNDAY I'll talk about my fave trends from Spring 2011 runways.  I think what designers do best is steer us in the right direction and it’s up to us to take up styles we feel confident in. My favourite collections for 2011 spring were Naeem Khan, Badgley Miskha, and Balmain - and this was due to the fact I wanted every item in my closet.

1. 70s Glamour - high waisted wide leg trousers, crop tops, prints, ankle length maxis, jumpsuits, tailored suits/blouses, wraps, hot pants, sequin and shimmer. I think almost every runway was inspired by a time in 70s fashion. I have these old pair of wide leg jeans and linen pants that I think I am going to dig through my old boxes of clothing, to bust out (once the weather is nicer).

2. The Romantics - I call this trend romantic, because its full of beautiful pastels, flowy sheer materials, and dewy faces. I love love loved Badgley Mischka's full Spring 2011 collection, it was full of this trend, and I think anyone would look super cute in it. When I was in new orleans I bought a pastel pink lace dress, and a sheer flowy white maxi. 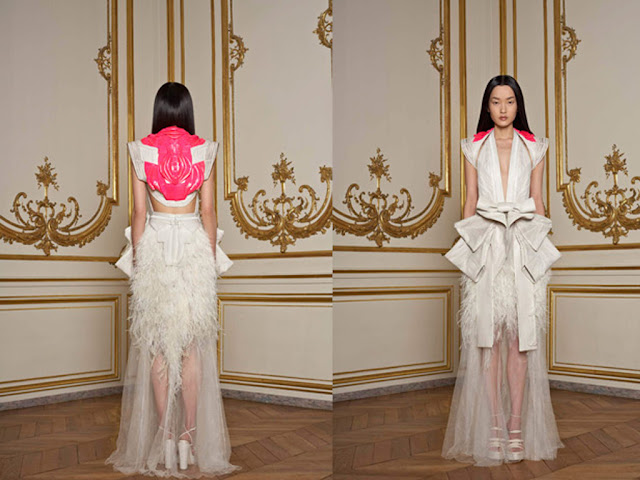 3. PUNK FASHION - Leather, Leather, and more Leather. A mix of tailored looks with a splash of leather funkiness, and dramatic cut outs. I am on the look out for a tailored leather blazer with padded shoulders, to wear with short pants and ballet flats for the day, and switch to jeggings and platform pumps for night.

4. Sophisticated DragQueen - I saw this across a few designers, where multiple colour palettes were being used. From the top, belt, skirt, everything was a mismatch - even with fabrics not just colours. I think there is a certain way of pulling off this trend, try one bold color and maybe one or two more neutral colors versus having 3 bold colors. E.g. Try a red skirt, with a silk nude tank tucked in with a purple belt and neutral shoes.
Louis Vuitton

Please note: All pictures above were taken from the official NYC Mercedes Benz Fashion week microsite (IMG), and Designer Central for Paris Fashion Week Collections images.﻿ I did not take these pictures but I did go through almost EVERY collection to find commonalities to determine the trends for this season.
Posted by 9to5 Travel girl at 8:20 PM 14 comments:

FASHION FRIDAY: Shopping can do a world of good

I will keep it short and sweet this Friday. One retailer has really taken their social commitment to the next level. Forever 21 is donating 100% of all purchases made online today, March 18, 2011, until 11:59pm. Also their shipping policy recently changed to FREE SHIPPING after $50 in spend.

If you were planning to purchase some of your Spring Wardrobe this weekend (given the nicer temperatures), take a look at Forever 21 because you will actually be shopping for a cause!

Check out details below, visit forever21.com

New Orleans back with avengence... 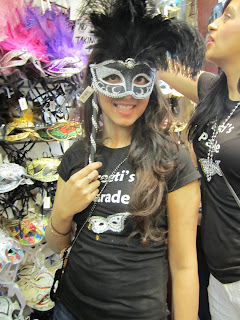 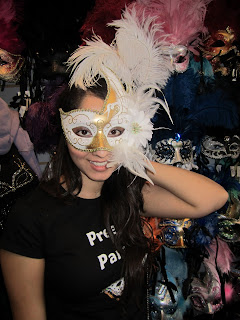 Just returned from 4 days in New Orleans, Louisanna. Myself, and 10 girls headed down for the brides bachelorette party. When I heard she had decided on New Orleans two things came to mind, the first Hurricane Katrina, and the second MARDI GRAS. I wasn't sure how I would feel about New Orleans as I have always considered myself a Cosmopolitan city lover. We were there 2 weeks before Mardi Gras which is defined as "Carnival celebrated on or culminating on Shrove Tuesday, the day before Ash Wednesday, the start of Lent. Traditionally, households consumed all the remaining foods that would be forbidden during Lent (e.g., eggs) on that day. It is a one-day event in France, but in the U.S. it lasts several days in New Orleans, where it is marked by parades, street celebrations, and extravagant costumes." While we were there the parades kicked off in and outside the French Quarter, there was even a parade devoted just to dogs called the BARKUS parade. After spending 4 days there I can sum this city as just pure good ol' FUN. Everything was a blast from the food, people, southern accents, shopping, and casual bar scene. I don't think there was ever a dull moment, which I kind of wish there was as I would likely have had more SLEEP on this trip lol. I have included a list of MUST DO's when in New Orleans below.

DINING - No matter what your looking for, whether Cajun, Creole, French, Italian, Soul, or American you'll find plenty of restaurants that will cater to your needs. Below are two places I think are a MUST to check out:

CAFE DU MONDE - The original French Market Coffee Stand, all they serve is coffee with biegnets. Biegnets are similar to donuts except they come out steaming hot with powdered sugar on top. They were to die for and melt in your mouth delicious. 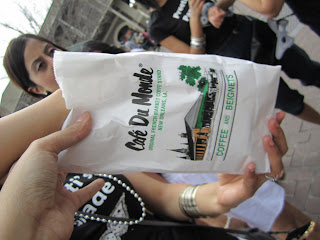 COMMANDER'S PALACE - Fine dining at its finest? The food, atmosphere, and service were splendid. Although we had a mishap with the bride to be's order, the restaurant quickly made up for it by giving an additional glass of wine for free and cutting her bill in half (without even asking for it). I ordered their trout and strawberry shortcake dessert and was satified with both. I would suggest trying the bread pudding I snuck a spoon from one of the other girls and it was to die for. 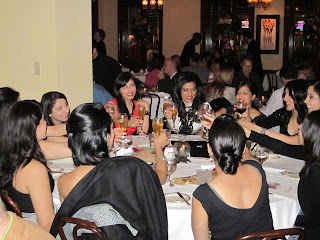 ENTERTAINMENT
DIXIE TOUR - We booked a 3 hour private tour right when we landed in New Orleans. The tour took us through the French Quarter (we saw Brad/Angelina's home), French Market, Jackson Square, historical cemeteries, St. Charles Ave, Audobon Park, Garden District (where we saw the Benjamin Button home), Loyola University, and much more. The tour was quite educational, and our guide Mike was quite informative, he was a 70 year old that spent his whole life in NOLA (his voice sounded exactly like Mark Wahlberg's, he had a port accent similar to someone from Brooklyn which was quite strange). He was amazing and explained what his experience was like during Hurricane Katrina (luckily he had flood insurance, unlike most people)  it was quite sad to hear (he spoke wonders about what Canadian officials did for the city, which made me feel very patriotic). What I loved most was his positive attitude and how much he talked about his wife (made me miss my hubby!), he also explained the people of NOLA did not want to be defined by Hurricane Katrina and New Orleans was ready to move forward. So that is the last you will hear the H word. 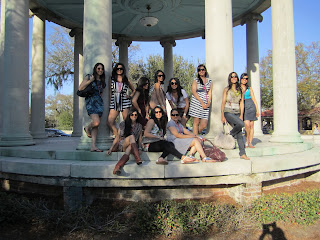 NEW ORLEANS SCHOOL OF COOKING - If you do one thing in New Orleans it would be to book a private hands-on cooking class with Chef Michael. This was the highlight of my trip there was 11 of us broken out into 4 groups and we each were in charge of making one of the dishes on our 4 course meal. We chose to make stuffed mushrooms with chicken and shrimp, shrimp and artichoke soup, sausage and chicken jambalaya, and pecan pie and prawns. I did not realize the 11 of us were Chef Ramsay's in the making, as every meal turned out amazing! Too bad we were so stuffed we could not finish it off. After the class we went shopping in the New Orleans cooking school general store, and bought this delicious seasoning called "Joe's stuff". I will say I used this seasoning the second day I was back to add some pizazz to my salmon. 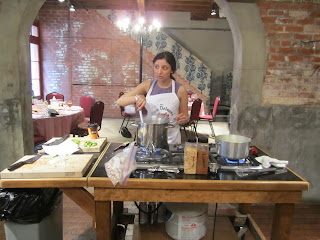 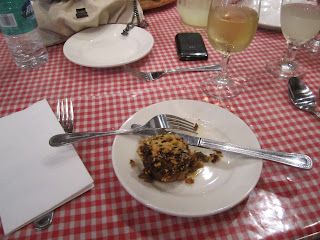 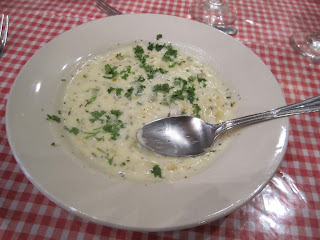 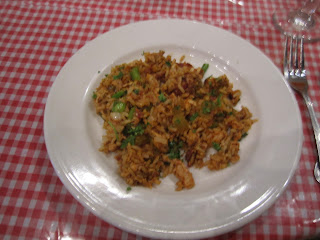 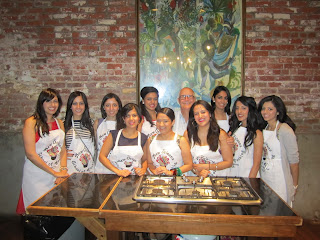 CAT'S MEOW - KARAOKE! For those that know me they will know that mimicking Britney Spears has been my life long dream, never had the guts to do it but always dreamed of being centre stage. Turns out New Orleans is where all dreams come true. This infamous karaoke bar allowed us to perform "Hit Me baby one more time" and "Girls just want to have fun", we even had guitar props! It was a blast, we got the bachelorette package which gave us all cat ears and tails, a free drink, and karaoke line bypass. We had lots of fun, although I found the MC of the karaoke joint a little sketch. In between each act the MC would come up and sing a song and than pass it to the next person. It was almost strange like he wanted to be a singer in real life, didn't make it, and now was using this karaoke joint to fulfill his dreams. Needless to say no one wanted him up there!

BOURBON STREET - Where the partying does not end -Dj's, dance clubs, Hurricanes, Hand Grenades, and if you're still standing............lots more! While we were visiting bourbon street was carpeted with colorful beads. Lots of casual bars with great top 40 music. Check out Howling at the Moon, The Beach, Razzo, Pat O'Briens, Cat's Meow (as mentioned above) and many more. Just hop around and see where your night takes you.

SHOPPING
I was not planning on shopping at all in New Orleans, as I thought there would be just big brand retail stores which I could explore at home. Turns out New Orleans French Quarter is filled with one-of-a-kind boutiques and vintage stores. I ended up coming back with 4 pairs of shoes, a gold clutch, and 4 dresses - at first I felt guilty but than I realized I was helping rebuild the New Orleans economy - one purchase at a time baby!
Be sure to explore Chartres Street in the French Quarter:
- Trashy Diva (1950's vintage inspired clothing, a bit pricey but they had beautiful coats)
- Head to Toe (looks like a granny's store, but they had beautiful unique clutches)
- Langford (urband outfitters feel, when you bought a dress you got a free cardigan from the store)
- Violets (ladies apparal)
- Wish ( another boutique for ladies attire)

9to5girl time - How I got to New Orleans? I booked a direct flight through Air Canada (2:39hrs distance) and it cost me $400. We booked the Roosevelt Hotel (Waldorf Astoria Collection) and it was absolutely beautiful directly through the hotel reservation line. The hotel for 4 days/3 nights cost $290 per person. Considering the bathroom was the size of my bedroom at home it was well worth the splurge. I also only needed to take two personal days to secure time off.
For bridesmaids planning a destination bachelorette, I would strongly recommend New Orleans, the food, people, activities, and shopping are well worth the adventure!

Until my next adventure,
9to5travlegirl